Fundamentals of Islam ( The Five Pillars ) 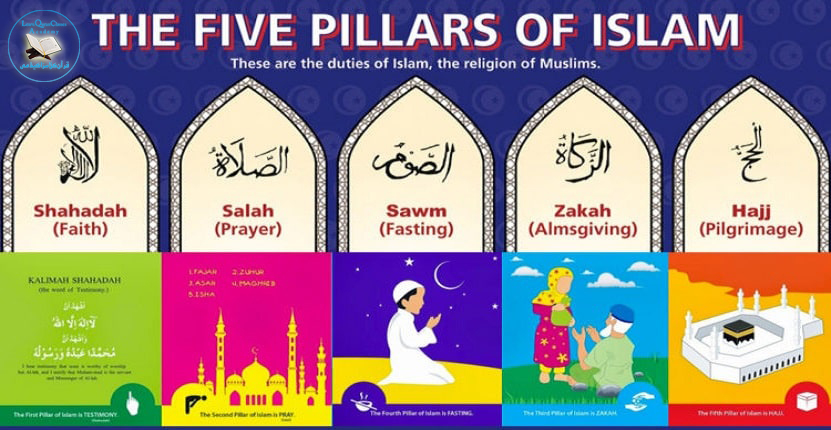 Fundamentals of Islam ( The Five Pillars )

The Five Pillars of Islam

ISLAM is said to be a complete Code of Life & Religion of Nature. That is absolutely True 100%, no doubt about it. ISLAM in Arabic language mean Peace, therefore, it has also been termed as the Religion of Peace. ISLAM is the last divine Religion of Almighty God on Earth based on 5 major Guiding Principles. These Beliefs & Practices are considered as the Pillars and core Fundamentals of Islam. The whole infrastructure of ISLAM is erected almost on and around these Pillars. Each of the Five Pillars is filled with the divine spirit, supreme thoughtfulness and sheer logic behind. A quick detail is given below precisely:

1.Profession of Faith – Kalima (Shahada or Witness) “La iLaha ilAllah Muhammad Rasul Allah…This notion means that “There is no God but The God Almighty-Allah (Only) and Prophet Muhammad (PBUH) is the Messenger of God Almighty-Allah”. These are the MUST READ keywords mandatory to enter into and embrace ISLAM. One becomes a Muslim only by reciting these words with sole conviction, understanding and firm belief. These words are in Arabic language and are required to be spoken in Arabic necessarily. The Quran, Islam’s Holy Book with divine revelations of God came on Earth from the Heaven was in Arabic as the Last Messenger of God Almighty Muhammad (PBUH) was an Arabic. Shahada is a faithful Undertaking to God with all its Meanings and Understanding. These Words of Witness are comprised of 2 components “La iLaha ilAllah” means that There is no God to worship except ALLAH (One & Only) who created the whole Universe, Earth, Sky, Stars, Sun, Moon, Space, Air, Water, Fire, Life, Death etc beside other thousands of Creatures and Muhammad Rasul Allah means that There is no Guide to follow except The Messenger of God, Muhammad-PBUH (One & Only) whoseObeying is MUST to be followed as the final Authority. No other Footsteps or Teachings nor any addition / deletion would be acceptable to God Almighty, at all.

How important is this Confession to God, one cannot imagine as The Messenger of God (PBUH) said that a Non-believer of even 100 Years old if recite this Shahada and accept it whole heartedly by his / her cores of Heart, he or she becomes just like a newborn baby clean and clear from all sort of Sins and if by coincidence died immediately with this belief, he or she will go to Paradise directly without any Accountability and if survived he or she will only be accountable for the good or bad deeds for the remaining life…The biggest ever Lucky Draw – A Ticket to Paradise.

2.Prayer (Salaat). After taking Shahada, Prayer is only the One Worship which is mandatory to each and every conscious adult Muslim, Men & Women without any Excuse or Justification. That must have to be performed 5 times in 24 hrs each in time in any way (standing, sitting, lying), everywhere whether over Land, on Air or in the Sea at Peace as well in the War, too. Muslims pray to God Almighty-Allah heading towards Mecca 5 times in a day & night. For this activity Ablution (washing Arms, Face, Head and Feet) is a Must before offering Prayer. The 1st Prayer is before Sunrise, 2nd upon passing the Midday, 3rd in the Afternoon, 4th after Sunset and 5th in the Darkness. Prayer consists of a recitation of the Verses (sura) of Qur’an to be accomplished on a small rug, mat over any clean place or piece of land, Single as well as Collective at Home, Office, Workplace or in a Mosque where One Guide (Imam) leads the congregation. On each Friday Men assemble in a large gathering inside the Mosque for the big noonday Prayer (Jum’a). Women can also join but not obliged to take part mandatory. The Prayer is a symbolic direct dialogue, barefooted as a gesture of humility and talking to God Almighty-Allah for seeking His help and guidance in every walk of life. The Prayer brings the submissiveness and simplicity which are vital signs of respect & piety in life. The Prayer not only gift us the spiritual uplift eternally but also give the clinical Health externally.

Modern Science & Researches have proved to the World at large now that this amazing worship activity of Prayer-Salaat does the miracles in Human Health, from Start to End i.e. from Ablution to Completion. Ablution is the First Step that starts with washing Hands up to Elbows, Face including Ears Nose & Throat, ¼th part of Head and finally the Feet up to Ankles. In this way, the Ablution cleans up the dust particles and act as germicide. After this the Prayer starts which involve all organs causing blood circulation normalized throughout the body from Head to Toes.

3.Alms (Zakat). Zakat is a conditional liability. In accordance with Islamic law, Muslims donate a fixed ratio of 2.5% of their Savings (shelved for One Year) to the Poor or deserving needy members of society. Many wealthy Muslims construct mosques, consuming fountains, hospitals, schools and other establishments associated with charity as a religious duty and for the benefits in the life Hereafter.

4.Fasting (sawm). During the daylight hours of Ramadan, the 9th month of the Islamic calendar, all grownup Muslims (except Patients & Travellers) are required to abstain from food, drink or sex. Through this brief deprivation, they renew their cognizance and gratitude for everything God has supplied in their lives. Qur’an came to Earth from Heaven during this holy month of Ramadan. During Ramadan Muslims share the starvation and thirst of the needy as a reminder of the religious obligation to help the ones less lucky.

5.Pilgrimage (Hajj). Every Muslim whose health and budget allow it is bound to make at least One visit to the holy city of Mecca, in present-day Saudi Arabia. The Ka’aba, a cubical shape covered in black embroidered hangings, is at the center of the Haram Mosque in Mecca. Muslims accept as True with that it’s miles the residence Abraham (Ibrahim in Arabic) built for God, and face towards its direction (Qibla) when they pray. Since the time of the Prophet Muhammad PBUH, believers from all over the World accrue and gather around the Ka’aba in Mecca at the 8th and 12th days of the final month of the Islamic calendar.

Children are said to be the Future Investment for parents. So, all Muslim parents must teach their kids between 7-9 years age group the elementary knowledge about Fundamentals of Islam. The description mentioned above was given in brief, however, for more details the Readers may contact registered Islamic Center.