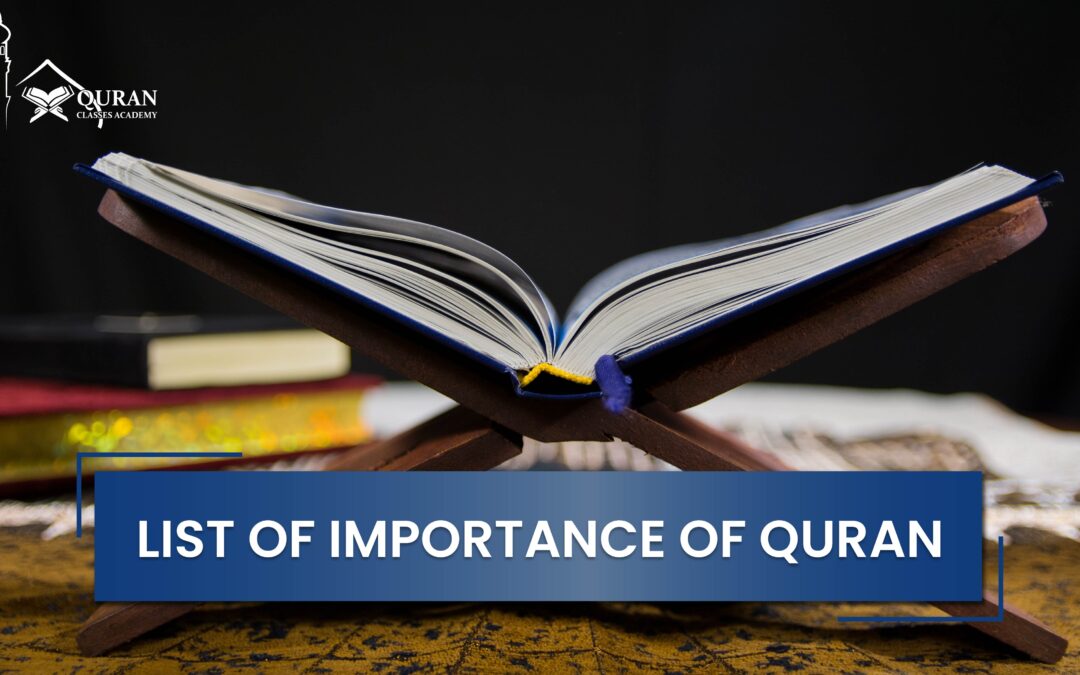 Holy Quran is a sanctified book revealed by Allah on his beloved Prophet Muhammad (P.B.U.H). Allah sent this holy book via angles 1400 years ago for the betterment of humankind. He sent this book to follow this guideline and achieve prosperity in life and hereafter. Quran is the most precious book of Allah, and Muslims have had the privilege of reading it to rectify their mistakes, tackle problems, and learn the way of spending their lives. In Quran, Allah says, “It is a book which we have revealed as a blessing, follow it and be on a righteous path, so that you may acquire mercy.” Now buckle up; we are about to explore the list of importance of the Quran.

You may also like to learn, How to Read the Quran?

Mostly the readers read the book, and after finishing it, they can’t read it again and again. But Quran Kareem has an incredible charm that a person never gets bored while reading it. In fact, the Quran is the only book on earth that people can read several times without losing its essence. However, after reading this consecrated book, again and again, an individual drowns in its aura and automatically attains inner peace and prosperity in life and the afterlife. Allah says the person who follows it and makes decisions according to it will be rewarded. Al-Quran invites the people and who accepts this invitation earns infinite good deeds. This shows the importance of the Quran in Muslim life.

Al-Quran Has it All

When it comes to the importance of the Quran in our daily life, it has all of it. Al-Quran is a light in the darkness, a ray of hope in an unlighted tunnel, an ounce of water in a desert that guides people towards the true and the righteous path. Quranic verses have everything in them. Quran brings hope, tolerance, good and evil deeds, ethics, spirituality, rights of people, humanity, justice, everything into the limelight. In a word, it is a complete guide to whole life, and now it depends on people that whether they take advantage of this treasure or not.

Al-Quran Is Ahead of Its Time

Quran is the book of Allah; every word and letter is of Allah. The book was ahead of its time. Although it was revealed 1400 years ago, it contains ground realities and scientific truths that scientists are discovering in this era. For instance, if we talk about the point of conflux, which was discovered recently. Scientists explored that when the two flowing sees meet each other, they do not lose individuality. Instead, they retain their qualities like temperature, color, etc. That is why at the point of conflux (when seas meet each other), we can see the water of two different colors flowing side by side. However, Quran talked about this 1400 years ago. In Quran, it is revealed that “he released the two seas, meeting [side by side], between them, is a barrier [so] neither of them transgresses.”

Similarly, when it comes to big bang theory, the process of fertilization, a meteorite containing iron, the process of formation of clouds, the pain receptors, and many more, scientists discovered them as science progressed, but Quran revealed these scientific facts 1400 years ago when there wasn’t even the name of science. So, all these things show the importance of the Quran in our daily life and prove that Al-Quran is ahead of its time and is the book of Allah. Because Allah is the creator of this universe, the creator has all the knowledge he included in this sacred book.

Quran Kareem is the only Holy Book that is not alerted and will never be as Allah himself took its protection. Other Holy Books, including Zaboor, Injeel, etc., have been modified by humankind. These books lost their essence, but no power on earth can change Al-Quran and its meaning. The Quran is exactly the same now as it was 1400 years ago. It contains the words of Allah, and a man can achieve prosperity in life and the afterlife by acting upon its precepts.

Wrapping up, aforementioned is the list of importance of the Quran. Quran has great importance in Muslims’ lives, and one can reach the road of success through Al-Quran. Quran is the book of Allah and is obligatory for Muslims to read and learn Quran. In a nutshell, the Quran is a guideline, and people can take advantage of it at every step of their lives.