Story of Hazrat Saleh AS 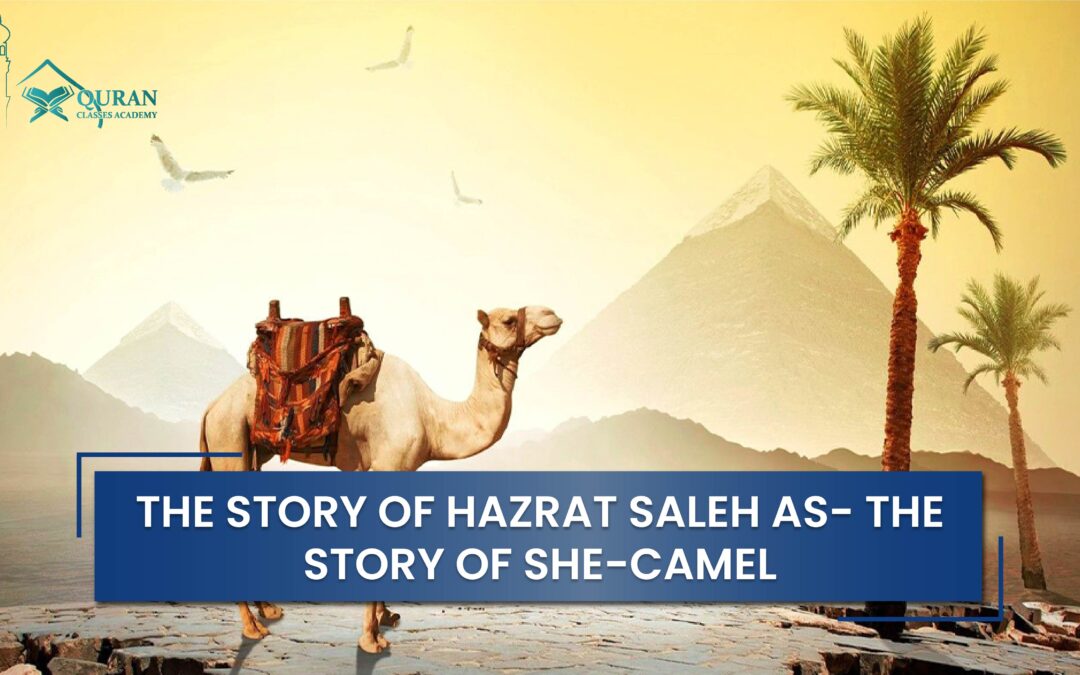 Hazrat Saleh AS – the story of she-camel

Prophetic stories are the best way of enlightenment. The story of Hazrat Saleh AS reminds us of the greatness and supremacy of Allah SWT. the story is about the tribe of Thamud.

Once Hazrat Muhammad SAW was going with his companions to Tabuk. On their way heading toward their destination, he (SAW) found rotted and deserted houses of Thamud. There was also a well that the people of Thamud used. The companion took water from the well for kneading the flour and cooking the meat. When Prophet Muhammad SAW knew about the meal, he immediately asked the companions to feed the camels’ food and forbade them to use the water. On their asking, the Prophet (SAW) replied that he feared of the torment that had been fallen of the people of Thamud. The Prophet told them the story thus.

You may also like to read; The story of Hazrat Noah AS

The miracle of she-camel

The people of Thamud were pagans and disobedient to Allah SWT. When Hazrat Saleh AS stopped them from worshipping the false gods, they did not listen and called him a sorcerer. But, then they asked him to bring a miracle if he was true Prophet. Their demand is described in the Holy Quran: They replied, “You are bewitched! [26:153] “You are only a human being like us, so bring forth a sign if what you say is true.” [26:154]

Hazrat Saleh AS promised his people that if he presented a miracle from Allah, they would turn to Allah. Then, he supplicated and was accepted by Allah SWT. “We are sending the she-camel as a test for them. So watch them ˹closely˺, and have patience.” [54:27]. With the command of Allah, a stone cracked, and a pregnant she-camel appeared, having all the qualities that the pagans demanded. When the people of Thamud witnessed the miracle, the came to know about the greatness of Allah and the true apostleship of Prophet Saleh AS. But, Allah SWT informed Saleh AS to tell his people about the restriction of the miracle. All these are mentioned in the Holy Quran: “And tell them that the ˹drinking˺ water must be divided between them ˹and her˺, each taking a turn to drink ˹every other day˺.” [54:28]

“And to the people of Thamûd, We sent their brother Ṣâliḥ. He said, “O my people! Worship Allah—you have no other god except Him. A clear proof has come to you from your Lord: this is Allah’s she-camel as a sign to you. So leave her to graze ˹freely˺ on Allah’s land and do not harm her, or else you will be overcome by a painful punishment.” [7:73]

But, the wrath of the people of Thamud grew when they noticed that the she-camel would drink all the water and would leave nothing for their cattle. So, they can drink her milk that will be enough for them. But, after some days, some chiefs sat to discuss the killing of the she-camel, and would get all the water.

There were nine infidels; one of them stood and went to cut off the legs of the she-camel. After doing the offense, the infidel went to Prophet Saleh AS and demanded him to torment them instead of regretting.

So, Allah SWT sent two torments. A severe earthquake and a loud scream. In the Holy Quran, the torment is described in such words: “Then an ˹overwhelming˺ earthquake struck them, and they fell lifeless in their homes.” [7:78]

“And the ˹mighty˺ blast overtook the wrongdoers, so they fell lifeless in their homes.” [11:67]

Thus, Allah SWT swiped away the nation that did not obey His order and the advice of His Prophet.

There are many more stories of Prophets AS that are the signs of enlightenment and guidance.