The story of Hazrat Noah AS 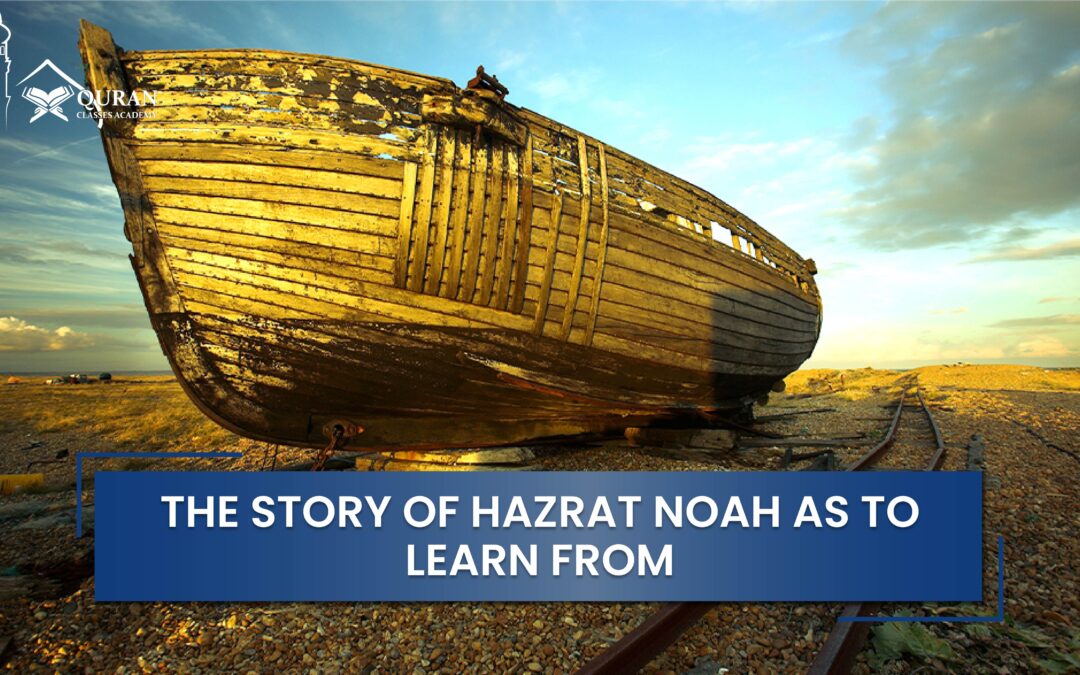 The stories of all Prophet AS are guidelines for us. We should relate their stories to our children to learn from them and apply the learned lessons in their lives. Countless stories and events are there mentioned in the Holy Quran, of which one is the story of Hazrat Noah AS.

Apostleship of Hazrat Noah AS

Allah SWT revealed apostleship to Hazrat Noah AS when after Adam AS there everywhere falsehood and misbelief had tightened their roots. No one was on the right track and offering to the one Allah, but they were worshipping the idols and devils. Then Hazrat Noah AS informed the arrogant people in these words as described in the Holy Quran: “We had certainly sent Noah to his people, and he said, “O my people, worship Allah; you have no deity other than Him. Indeed, I fear for you the punishment of a tremendous Day.” [7:59]

But some chiefs of his tribe refused to follow him and answered in these words: “Said the eminent among his people, “Indeed, we see you in clear error.” [7:60]

The People at that time called him a liar and thought that he was making them inferior, and said if Allah had meant to call them toward Him, He would have sent an angel for the preaching of religion. The Holy Quran says these words in averse: “But the eminent among those who disbelieved from his people said, “This is not but a man like yourselves who wishes to take precedence over you; and if Allah had willed [to send a messenger], He would have sent down angels. We have not heard of this among our forefathers.” [23:24]

Allah listened to his complaint and informed him about the torment of water, and also taught him how to save his men who have followed him and accepted the religion of Allah. Quran says: “So We inspired to him, “Construct the ship under Our observation, and Our inspiration, and when Our command comes and the oven overflows, put into the ship from each [creature] two mates and your family, except those for whom the decree [of destruction] has proceeded. And do not address Me concerning those who have wronged; indeed, they are to be drowned.” [23:27]

So, to save the true followers, they were instructed to embark on a large boat. The disbeliever then mocked them on forecasting the rainstorm. Then, the earth began to vomit water, and the sky fell heavy rain and storm.

Conversation of son and father

During the storm, the most mentioned conversation is that of son and father, Noah AS. Hazrat Noah As asked his son to embark on the ship, but he refused by saying that he would climb to a higher mountain and save himself. Holy Quran very clearly narrates the conversation of father and son in these words: “And it sailed with them through waves like mountains, and Noah called to his son who was apart [from them], “O my son, come aboard with us and be not with the disbelievers.” [11:42]

“[But] he said, “I will take refuge on a mountain to protect me from the water.” [Noah] said, “There is no protector today from the decree of Allah, except for whom He gives mercy.” And the waves came between them, and he was among the drowned.” [11:43]

During the conversation, a huge wave of water drowned the disbeliever, the son of Noah AS, and those who had embarked on the ship were saved.

The story of Noah AS gives us the lesson that only those who are close to Allah are believers. The religion of Allah, Islam, is not confined to any kit and kin. Here, you can find more inspiring stories of the Prophet AS while clicking on website blog.